“It was, for me, a self-help tool. It was a way in which I experienced a very deep transformation in who I was as a woman — as a person.” ~Elsie Escobar, on podcasting

How do we, as content creators, begin to break the patterns and shift the narrative? It might not be what you think…

Elsie Escobar is one of my podcasting idols. Actor, yoga teacher, podcast producer & advocate (you can see why we connect with each other so well), her original podcast, Elsie’s Yoga Class was one of the first I ever listened to — before I even really knew what a podcast was!

Now, after listening to her for years and working one on one with Elsie through her E-League mentoring program, I have a whole new appreciation for the question, “What else is possible?” because for Elsie (and for me), podcasting is about so much more than downloads, sponsors and statistics.

And no matter what kind of content you are creating in the world, through social media, a blog, a podcast, videos, workshops, your business, your art, etc, YOU have the option to follow the pack or carve a whole new path to shift the conversation. Find out how, listen now…

“Go to the things that YOU really resonate with because that’s the conversation we need to have, and THEN you frame it on your point of view because that’s going to start to break patterns.” ~Elsie Escobar, on media consumption and creation

The Panel at Podcast Movement

My favorite mediation episodes include:

Episode 62: Yoga Nidra Yourself Out! a 65 min Deep Meditative Relaxation

The Creative Impostor Magic page! Get a special gift from Andrea here.

Kelly Covert’s podcast interview with MOI on In Her Voice

Andrea’s Patreon Page — where you can support the show, get cool gifts from me and can become an active participant in the creative community!

Free Audio Book & 30 day trial membership with Audible.com (support The Creative Impostor when you sign up!)

I WORK IN THE CROSS-SECTION OF TECHNOLOGY, DIGITAL MEDIA & HOLISTIC LIVING WITH A HEAVY BIAS ON PODCAST STRATEGY AND CREATIVE USE OF AUDIO.

As a podcaster since 2006, I was one of the first female indiepodcasters using audio to teach yoga. Elsie’s Yoga Class has now been downloaded over 4 million times!

I’m currently the only female pundit in the podcasting space with expert insight into indie podcasters’ impact, influence, and power.

My obsession for podcasting got me a job working with Libsyn, the leading podcast host and distribution network created in 2004.

I’ve been there since 2007 and have had the pleasure of working with hundreds of podcasters, sharing tools for better production, educating them in the fast moving podcasting space, as well as cultivating a strongly engaged community through The Feed: The Official Libsyn podcast which I both co-host and produce. The Feed’s sole focus is keeping people podcasting.

I also co-run the largest community for women in podcasting with a corresponding podcast (of course) called She Podcasts.

Our sole mission is to empower women to continue to share their voices while creating a safe community of podcasting education and support.

My biggest differentiator in the podcasting industry?

I’m a die-hard podcast junkie who lives, breathes and works the medium, and has since 2006.

I’ve pulsed with the space and grown from someone that had NO IDEA what a digital recorder was or how to record anything to someone that currently offers advice to thousands of people a month.

I have the unique perspective and expertise of a podcast listener, independent podcast producer, and podcasting industry analyst/personality.

I know the heart and soul of podcasters and podcasting well beyond iTunes and public media.

This episode was mixed by Edwin R. Ruiz of Mondo Machine.
The Creative Impostor theme music was created by JoVia Armstrong.

I’d LOVE to hear from you!

If you’re listening in Apple Podcasts, PLEASE subscribe and leave a review. It’s how Apple decides which shows people find when they are searching for specific topics like this one. 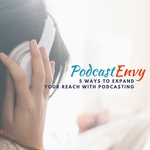 5 Ways to Expand Your Reach With Podcasting

Subscribe to get your FREE Podcast Envy Audio Download & Worksheet: and learn how to expand your reach, build your community, elevate your platform, share your message and more!

Success! Now check your email to confirm your subscription and satisfy your podcast curiosity.